The History of Orchards in Thurmont with Elmer “Lee” Black 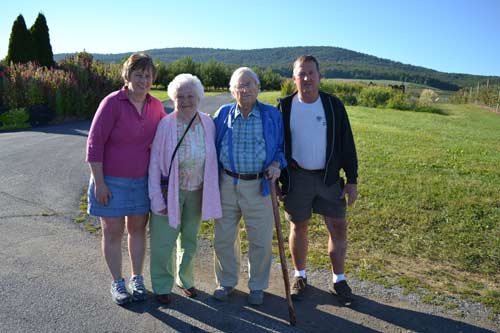 Elmer “Lee” Black was born January 31, 1923, near Thurmont. He was the son of the late Willis G. and Maude Baker Black. He had a brother, Harry, and a sister, Betty. Due to the untimely death of their father when Harry was 16, Lee was 14, and Betty was 12, they all learned to work hard to help their mother during the 1930s when times were tough.

Many days were spent picking green beans at the Zentz Farm (now Rodman and Bobby Myers farm). Lee and Harry built a small chicken coop to raise and sell chickens and eggs. They took care of several bee hives to get honey for themselves and sold or bartered it. They cut, split, and sold cords of wood during the winter months for some income.

The boys would trap and skin small wildlife to get money for the pelts. When trapping skunks, you had to keep the skunk’s feet off the ground or it could spray. Lee remembered one time, when he was getting a skunk out of a trap, he held it by its tail while working the trap, but accidently got its back feet back on the ground and, got sprayed! When he got home his mother had to scrub him down in vinegar and tomato juice to get the smell off of him!

When Lee was a kid in the 1920s and 1930s, there were two places to get fruit around Thurmont. The first was a big orchard owned by Hooker Lewis on the hill behind where Cozy stood and before the highway went through. That land is now developed. About the same time, Johnny Kelbaugh had an orchard where Gateway Candyland is now. Harry Zentz was known for making cider at the time. Lee said that before he was born, most farmers and homesteaders had a small orchard of their own.

After graduating from Thurmont High School in 1940, Lee enlisted in the Army Air Corps. While serving with Headquarters Squadron 21st Air Service Group, he served as a photographer. During WWII, he was sent to the Asiatic-Pacific Theater, and was stationed in Australia and then New Guinea. He took thousands of photographs from the ground and air for Public Relations and History Reports in locations from New Guinea to Tokyo.

Discharged in 1945 after earning the rank of Staff Sargent, Lee then started a photography business in Thurmont and Emmitsburg.

Lee met his wife Frances, at the Monterey Tea House on New Year’s Eve. She was born and raised in Baltimore City. She said, “My prudish and strict mother left me with my promiscuous aunt and she took me along to a drinking place.” Frances was 16 at the time, Lee was 10 years her senior. Within three months, they were engaged and married. The year was 1949.

With a chuckle and glance at his wife, Lee said, “We’ve been together ‘off and on’ for 67 years.” This comment earned him a thump on the shoulder from his ‘Fannie’. Still smiling, he added, “I’ve had interesting things happen to me.”

Wanting to spend more time outdoors, Lee and Frances bought Hooker Lewis’ Strawberry Field in 1950 and started Blacks Hilltop Orchard. Hooker Lewis had several little orchards around Thurmont. Lee said, “During World War II and right after – nearly everyone who had an apple tree could make money from it. But after the war, you had to be good at making an orchard to stay in business.”

Lewis’ Orchard, Pryor’s Orchard, and the original Kelbaugh Orchard were the main orchards in the area. Over the years, different people bought parts of Kelbaugh’s Orchard. Russel Flanagan, who had been a mason, quit and went into the orchard business. Right after the war, Hooker Lewis’ son-in-law opened an orchard that is now Pryor’s Orchard. Galen Pryor of today’s Pryor’s Orchard is a great-grandson.

Lee enjoyed the independence of owning an orchard. All of his and Frances’ six children – two girls and four boys – worked the orchard by picking and thinning fruit.

Ira Kelbaugh, son of Kelbaugh Orchard’s originator, Johnny Kelbaugh, originally planted the orchard along Kelbaugh Road. Lee’s brother, Harry, worked for Ira during the war. When Ira semi-retired, he told Harry he would sell him the orchard. For years, Harry took care of the orchard for half the profit and eventually bought it.

May through September
Monday - Sunday
9am - 5pm 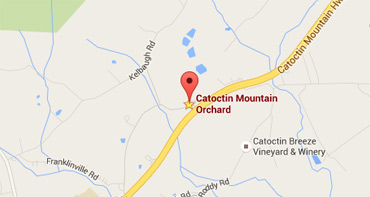 Great farm market sitting on US 15 in Thurmont.  The produce highlight has gotta be the peaches — they’re perfect, the best fresh peaches I’ve ever had — but they carry everything that’s in season, fruits and vegetables, and it’s always good.  …

This place is located right off US-15 south of Gettysburg, so we stopped by on the way back to DC from PA.  It was apple harvest time so they had pick-your-own apples and a pumpkin patch.  The farm market was buzzing and had a wide selection o…

Love coming here after going up to Gettysburg, PA.  Bought a Apple/Cranberry Pie that is very good right now, along with some Apple Cider.  My Daughter got a piece of Fudge along with a Cake Lollipop. Always love coming here and walking alo…

Love this placed so glad we happened to pass by on our way to Gettsyburg! I love apples and they offer free samples, which I thought was pretty amazing! I tried a cameo apple and it was perfectly crisp and delicious! We left with a box of them. …

Catoctin Mountain Orchards (CMO).  There’s only one way to describe them.  They sell nature’s candy. I absolutely hate eating fruit.  I never ever buy fruit and don’t like to eat it.  I think it’s because I don’t like anything sour.  And if …

We paid a visit today during pumpkin season to get out and look at the leaves, buy some fresh goodies, and soak in sunshine and fresh air. This place is hoppin! Inside the store, the bakery is pumping out the mouth watering scents from freshl…

A favorite visit of ours every fall, this place has some of the best apple-based products around! At least once a year we’ll travel the hour up here to stock up on apples, apple pies, apple cider, and various preserves and snacks. Prices are fai…

It’s a nice little farmer’s market off the beaten path. I didn’t see too much actual produce when I was there, but the selection of jams and pickled veggies was great. I’ve thoroughly enjoyed the horseradish pickles I got, and my partner wishes …

This country store and bakery is awesome!  I have been here many times and purchased upwards of 20 pies in the past year (some were gifts).  The staff is always friendly. The pies are so tasty!  My favorite is the Apple Walnut and Strawberry …

So worth the trip up to Thurmont!  Beautiful location, great fruit and veggies.  Oh and the pies… The minute you walk into the store the wonderful smell hits you.  We get the apple praline pie every time we visit and it’s always a favorite with …